skip to main | skip to sidebar

When I was a kid we used to go to Dublin in the summer. We spent a lot of time walking around the city window shopping. I think that was the first time I say someone drawing on the pavement. I was awestruck by the skill of those artists and since then I've always harboured the desire to get some chalk and do it myself. Today was the perfect opportunity. 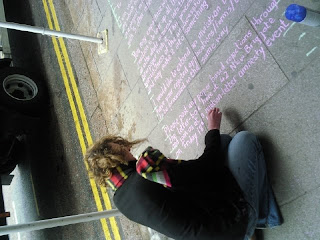 Nobdy much had been paying attention to my residency in the past couple of days. I decided to rewrite my letter, the same one Rosie was delivering around town in pink on the ground and the one that was in the window of my display. At the start people just walked over me, but when I got a few sentences down people started stopping to read it and then to look in the window.

A group of teenage boys stopped suddenly and stood around me. They questioned what I was doing. Slightly intimidated by their stance, but pleasantly surprised by their interest we struck up a conversation about what we do when we're bored and whether I would get in trouble for what I was doing. As abruptly as they arrived they departed and I continued writing.
Posted by Rebecca Strain at 19:51

The Fine Art of Selection (I'm Sorry Too)

Rebecca Strain
is in love with paper.